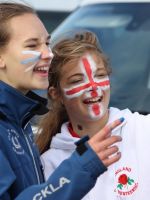 These took place over the weekend of 14/15th September, with the Indidual event held in ideal weather on Mynydd Llangattock and the relays in a little less than ideal weather on Clydach resulted in a win for England with Scotland 2nd, Wales 3rd and Ireland 4th.

The Individual race took place in fine, breezy conditions at Mynydd Llangattock - a hilly, runnable open area in the Brecon Beacons. The assembly was near the top of the hill, giving good views over the countryside and also of the runners in the latter part of their courses.

The Relay competition took place at Clydach Terrace – another open area but with complex contours formed by old mine workings. The weather forecast was for rain and high winds later, but the mass start for M16’s and W16’s took place in fine weather. Again, the assembly was at the top of the hill (although the tents were pitched in a sheltered spot below) giving a good view of the runners at several points over a well-planned course. The competition turned out to be two separate races – the first between the Scots and the English, with the Irish and Welsh some way behind.

Bad weather set in, and the later runners had to battle through  strong winds and heavy rain over the very exposed terrain. The Relay points score reflected the Individual results and so Scotland came second to England, with Wales winning their close battle with Ireland to take the Judith Wingham trophy.