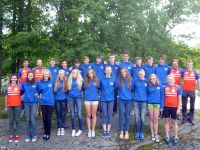 The ‘Stockholm’ training camp is aimed at M/W17’s and is held around the middle of August. Accommodation is at the ‘OK Ravinen’ club hut and because of its proximity to central Stockholm use is made of public transport to training and competition venues. The camp usually accommodates 16-20 athletes.

The Stockholm training camp is based the club ‘hut’ of OK Ravinen (one of the orienteering clubs based around Stockholm  www4.idrottonline.se/OKRavinen-Orientering). The club hut is in Hellasgården in the Nacka district to the south east and in the suburbs of Stockholm.
It is in the middle of Stockholm’s nearest ‘real forest’ and is easily accessible by public transport.

Accommodation is in the OK Ravinen club hut. The participants will sleep on the floor in one of two rooms in the building.
The hut is equipped with toilets and showers.
The tour chef prepares all the meals on site and specific dietary needs are catered for. Athletes will be expected to assist with chores during the camp.
There is plenty of space around the hut for outdoor games.

Since the late 1990’s a number of training tours have taken place in Scandinavia with popular venues such as Halden and Uppsalla. These catered for the older age groups and were aimed at providing experience of training and competing in Scandinavian terrain.
With the loss of all junior overseas training tours organised by British Orienteering it was decided in 2011 to organise a camp for M/W17’s based on the OK Ravinen club, thanks to the assistance of Nick Barrable who is a member of that club.
All attendees join OK Ravinen which brings a number of benefits both short and long term. In the short term there is a reduction in the cost of staying in the hut, entry to local races and a free ‘O’ top. In the longer term, many past attendees have used their membership of OK Ravinen to compete in top class Scandinavian competition.

As you would expect there is an abundance of top class orienteering terrain within easy access of the hut. The tour makes use of the extensive Stockholm public transport system to get to training areas and competitions in the Stockholm area.

The camp is aimed at M/W17’s who have achieved the required standard in the nominated selection races (See Stockholm Selection criteria). It is expected that up to 20 M/W17’s will attend. If insufficient M/W17’s qualify the selectors may add suitable M/W16’s.
In support of the camp there is a Tour Manager (TM) who has responsibility for such things as travel, accommodation, food etc.
The TM is supported by a chef and a Lead Coach. The Lead Coach has a team of up to 6 coaches.

As last year, we took a late August date - 13 days - starting on a Tuesday 13th August - Sunday 25th August. Only 1 athlete came a day early this year and Scott Fraser took care of him in Södertalje as he flew into Skavsta. All left on Sunday. Some were back in their Scottish Schools on the England BH Monday. Some Scottish athletes missed a couple of days of school in the preceding week too.

The policy/process seemed to work smoothly and there were no oversights/complaints, unlike last year, so the new version would seem better. We had a few 'no's which we knew about in advance which was very helpful. Sue Marsden provided the invaluable results excel spreadsheet.

With no Swedish Champs to dash off to, the tour was a bit more relaxed and cheaper. However after last year, Ravinen did increase their fee by a little. £70 however for a £35 club top, 4 races (av. £12 each), some training maps/permissions (£10) and 13 nights in the club hut, is a net loss for them and we certainly appreciate the support we get. I hope some of our talent can repay them by running for Ravinen/moving to Stockholm for a bit, in future! We did 3 large washes at my apartment block (3km from clubhut on bus route into town) in my communal washing machines. (6 industrial washing machines full each wash!)

Most days there was a swim in a Lake - often at Hellasgården itself.

The MTBO competition turned into training as the race got moved. I think the athletes enjoyed doing something a bit different. The Roller skiing, TrailO and VO2 max testing didn't come off, but more due to lack of time to pursue them, but I might try again next year! I have just done a good TrailO in Northern Stockholm I hope we can use in 2014.

We did manage to sort out an Olympic Weights training session with a guy who has worked with Ravinen and Farsta OLGY before. He is a former Olympic Coach and was well received. 2 x 90 minute sessions (we split the boys and girls up.) was well worth it.

We got tour blue hoodies and black technical Ts done the same as last year from ethicstar in the same colours. They seemed to go down well and certainly the hoodies are very good value.

Results wise, Julie Emmerson won D18E Middle at the Sorundadubbeln (400sek voucher for an O shop!) Sarah Jones would have won the long on the following day by almost 9 minutes (!) had the class not been voided as a control had been put out in the wrong place. In the guys, Sasha Chepelin was 2nd on the Sorundadubbeln Long, +3:48 but almost 2 minutes clear of OK Ravinen H18 superstar Emil Granquist who won H18E at the O-ringen, Silver at JEC - this was an excellent performance by Sasha, still a 16. He also won the Middle Club Champs, pipping Ravinen's Swedish Squad star M20 by 7 seconds, who had recently arrived back from a pre-JWOC training camp to Bulgaria.

At Melkes Minne Relay, the format had changed to 2 runners running 2 legs on a Sprint spec forest map. Joe Woodley was on fire and together with Dane, they won the H20 class. The Malbon/Adams duo were 3rd, +9.01. On D20, Sarah Jones and Natalie Beadle were 3rd. Our M16s failed to deliver coming in 5th. Our D16s were in the mix but ended at the back of the pack in 4th.

See results round up below.

Next year 2014 the hut is booked for Tues 19th Aug - Sunday 31st. This is a week later as I am doing Commentary at World Students. There are local races both weekends like this year

I borrowed Farsta OLGYs SI and mini-kites, and reused a lot of maps/exercises from Farsta OLGY and Ravinen technical training so saved a huge amount of time and printing there. BML paid for the printing of 200 x A4 waterproof maps. So big thanks to them.

We had some map permissions to pay for, some we got free and some Ravinen paid for directly.

Louise managed very well in the kitchen and the coaches in the forests. The athletes were a delight as usual.

Ralph Street came up from Södertälje and Cat Taylor came down from Uppsala to visit, each of them training with us and staying overnight. Cat gave an inspirational talk and Ralph related very well to the athletes: the boys were quizzing him intently after the day’s training. Ruth Holmes also joined us for the last couple of days.

The camp will be for a maximum of 20 athletes

Athletes wishing to be selected will have achieved 125% or less of the winner’s time as averaged over three of the above races.

If there are more than the maximum number for the camp who have achieved the required standard then those with the lowest averages will be selected.
The selector may choose not to fill all available places if there are insufficient qualified athletes.

The tour athletes will be selected by Nick Barrable (OK Ravinen) and the selections will be reviewed by the Chairman of Junior Regional Orienteering Squads (JROS).

All cases of illness or injury which may affect an athlete’s ability to compete in one of the above selection races should be notified in writing to the athlete’s Regional Squad coordinator prior to the running of that race, clearly explaining the reasons for their failure to compete. The Regional Squad coordinator will make the Selector aware of such notifications prior to the race.