This years Junior Home International (JHI) was hosted by Northern Ireland OA on the weekend of 24-25th October.
Both the days, Individual and Relay, were run on Magilligan Strand on the North West coast.
In a hard fought contest Scotland came out as overall winners by just 12 points, having trailed England by 7 after the Individual day.

Here is a summary of the results;

Scoring is calculated by: 1st = 16 pts, 2nd =14 pts and so on with the first 2 runners from each nation to count. So England won the Individual competition by 7 points.

Results from the Individual

Results from the Relay

Photos by Wendy Carlyle from the Individual and Relay

A full report from the Scottish Team Manager, Maureen Brown, is available on the ScotJOS web site

An article by Alistair Masson of the England team 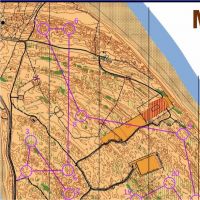 This year was my last JHI and it seemed a fitting place to be as Northern Ireland was also where my first JHI was 4 years ago. Last year Scotland beat England to the title for the first time in many years and only the second time ever, so the pressure was on for England to get the trophy back.

Both days were on the sand dunes of Magilligan Strand and we were staying on the map, in an army barracks, just next to a prison. I was quite an early starter in the individual race and was first M18 back after a pretty solid run, I’d been a little bit scrappy early on but I found the area easier technically than I expected with little problems for the rest of the course. I ended up 5th on the day and fellow SO member Stan Heap, who was making his England debut, also had a good run to come 7th but more importantly England were leading Scotland by 7 points going into the relays, making it all to play for.

The rest of the day was well organised and we had plenty of fun stuff to do. 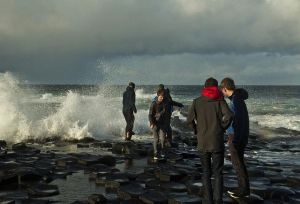 Firstly we went to the Giant’s Causeway where some people got soaked by the giant waves, followed by a visit to Carrick-a-Rede rope bridge, which had some awesome views and we even got to see a rainbow and dolphins! In the evening we had the prize giving and then did some BB gun and laser shooting which was a bit different. To top it all off we had the traditional JHI ceilidh which, in usual fashion, the Scots took control of. For most of the time we were split into separate nations, which was a bit annoying as it meant there wasn’t as much mixing between everyone; however, it wasn’t really a problem and all in all it was a very good day.

The relay arena was pretty cool as there was a really long and fast run in, with the sand dunes behind it where competitors could be spotted. The relays are always run in the order of 16s, 14s, 18s. In the men’s relays the Scottish 14s and 16s had impressive runs coming back with a 1, 2, 3, 4 on second leg(but one team had miss-punched so actually only a 1,2,3). Flurrie Grierson sent me out in 5th (actually 4th) with fellow Englishman Tim Morgan seconds behind me, and Aidan Rigby and Harrison McCartney just a little further back. We knew it was going to be incredibly difficult to catch the first and second teams who had a large gap but the 3rd/4th teams were possible and we were all pretty psyched to give it our best shot at catching them. 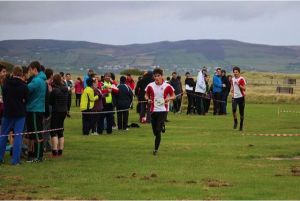 Tim and I were pushing hard to catch Andrew and Tam (Scotland 3rd/4th team), which it seemed like we were doing, but a small slip at 3 lost us some time. At this point Harrison and Aidan, after bombing it, caught us up. We were running in an England pack for a while which was really cool but I didn't really appreciate it at the time. Harrison had a slightly different gaffle and was going really well so pulled away from me and Tim -  Aidan was struggling after his fast start. Tim and I were a bit scrappy in our panicky state but still seemed to be gaining on Andrew. Once our gaffles changed however it seemed we were unlikely to catch him and think we both struggled physically on the last part. I ran into the finish with Tim to hear the bad news – the Scots were too good in the end and had won by 4 points after taking a 1,2 in the men’s relay and a 1,3 in the Women’s. Jeff Butt summarised it nicely with the statement  “last year England lost it, this year Scotland won it”.

I was surprised at how much I was disappointed by the result as, when I’d ran the JHIs previously I’d probably cared more about my individual performances than the overall scores. Perhaps this was down to it being my last JHI and also the fact that I’d have to return to Edinburgh and train with all four of the Scottish M18s the next day (in fairness they didn’t give us as much stick as I’d expected). Luckily Tim and I were flying back and didn’t have to suffer a long journey back with the Scots!

Thanks to those involved for a very good weekend even if it wasn’t the result I’d wanted.

Credit to Wendy Carlyle for the photos.