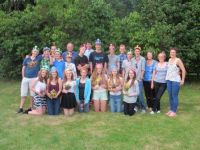 The ‘Deeside’ training camp is based at Templars’ Park, Maryculter on the banks of the River Dee near Aberdeen. It is aimed at M/W15’s and like the Lagganlia camp takes place around the end of July. There are usually around 16 places for athletes on the camp.

The Deeside training camp is based at the Templar’s Park Scout Camp, Maryculter (http://www.templarspark.org.uk/ ). The site is only 8 miles from Aberdeen and is easily accessible from the A93.
The Deeside valley is rich in excellent orienteering areas such as Glen Feardar, Cambus O’May, Inchmarnoch, Creag Choinnich etc.

Accommodation is in two buildings, the George Smith centre and the White House. Both have a number of dormitories of various sizes and their own showers and toilets.
The tour chef prepares all the meals on site and specific dietary needs are catered for. Athletes will be expected to assist with minor chores during the camp.
The site is 45 acres in size so there is plenty of room for outdoor games.

2013 was the first year that this site has been used for an extended tour, previously having been used by ScotJOS (The Scottish Junior Squad) for weekend trainings.
Although this is the first time that this location has been used for this tour similar tours have taken place since the late 1990’s based at Glenmore Lodge, Badaguish and Lagganlia.
The move to Maryculter has been largely prompted by restricted land access caused by the presence of capercaillie and WOC 2015 in the Spey valley.

As indicated above there are many top class orienteering areas along the A93 from Braemar in the east to Aberdeen in the west. In addition to those mentioned above there are the areas of Bogendreip, Glen Dye, Scolty and Allt Cailleach all within easy reach of the centre.
These areas present different orienteering tests to the terrain in the Spey Valley and are seen as a suitable progression for the juniors.

The camp is aimed at M/W16’s who have achieved the required standard in the nominated selection races (See Deeside Selection criteria). It is expected that up to 16 M/W16’s will attend
In support of the camp there is a Tour Manager (TM) who has responsibility for such things as travel, accommodation, food etc.
The TM is supported by a chef and a Lead Coach. The Lead Coach has a team of up to 8 coaches, providing an ample coach: athlete ratio.

A dynamic and varied coaching tea, combined with a hard working and fun loving athlete cohort made for an enjoyable and highly beneficial tour for all. We had an open coaching structure to encourage input from the full range of coaches present, which worked well for this number of athletes and coaches. Notes were made throughout the week by the coaches, and will be collated into tour reports by Jon who generously offered to do so on the S6D rest day. In addition to coaching in the forest all athletes were requested to reflect upon each day, and then debrief with a coach each evening.

The venue of Templars Park was used fro the first time by JROS. It features ample cooking facilities, more communal spaces than we knew what to do with, and is also a reasonably good sprint area, now an entertaining microsprint map. It was very cost effective, since, although we paid for the minimum number of 30 visitors, the cost per person per night still works out at £7.71. It is necessary to bring sleeping bags, and communicate well in advance with the centre via the e-mail enquiry, since it seems impossible to get through on the phone.

The stated capacities on the web site are somewhat overestimated. The George Smith centre in fact has rooms sleeping 8, 6, 4 and 4, although the last in particular wouldn’t really accommodate more than two. In fact good for up to 12 juniors and 4 coaches as more would be something of a squeeze. The white house has rooms of 8,6,2; though again these are slightly ambitious … we had all 9 juniors in the 8 room, 4 coaches in eth 6 and one in the 2… this is really about the maximum, giving a total capacity all told of about 21 juniors and 9 coaches. This number is further restricted by the showering however, since there are 3 showers for everyone, and they run out of hot water by about person number 15.

The areas used varied from great to fantastic, with the possible exception of the east end of Scolty, which was rather  spoilt by heavy brashing and windblow. Despite this Ali McLeod says that there are very many more even better areas on Deeside. The programme was as below:

Nev Myers co-ordinated a team colours tour top order, which came to almost exactly £33 per top. All of the juniors and two of the coaches got tops.

Costs were lower than expected, partially with Liz Orr being fantastically frugal shopping at ASDA on the near side of Aberdeen, partially through having two 9 seater minivans from Turner in Aberdeen, which are cheaper than full minibuses, and partially through organising coach transport in a very cost effective manner. Jon also chose to buy fewer maps than Lagganlia, which on reflection was quite effective, with just about enough for each athlete to take away what they wanted – thought we were a little tight on occasion.

Higher than expected costs were incurred on first aid equipment, since there was no pre-existing stock. Jon Marsden is now custodian of a JROS first aid bag, which has a dozen instant ice packs, several bandages, and some compeed, as well as three premade waterproof first-aid kits by lifesystems, which were useful to give to those coaches who had training but no kit for the week.

Local club visitors: A slightly misunderstood email offer resulted in us having 2-5 local club juniors with parents/coaches joining us in the forest each day. This turned out to be no issue whatsoever, and they operated more or less autonomously from the same maps and controls. We also received a token of £20 in gratitude at the end of the week, as well as not having paid for any areas or OCAD files.

Thoughts for the future

It would have been a good idea to get each athlete to fill in a more formal short reflection on their main points to take away from the week.

The accommodation capacity was limited by the showering facilities, making the theoretical maximum of around 21+9 inconvenient to realise. 16+8 was manageable. Otherwise a great step up from Lagganlia in terms of adventurousness.

Ali McLeod says that there are a great many fantastic Deeside areas to explore.

Possibly technical tees or other printed clothing instead of tour orienteering tops?

The camp will be for a maximum of 16 athletes

Athletes wishing to be selected will have achieved 125% or less of the winner’s time as averaged over three of the above races.

If there are more than the maximum number for the camp who have achieved the required standard then those with the lowest averages (behind the winner(s)) will be selected.
The selectors may choose not to fill all available places if there are insufficient qualified athletes.
Those who attended the Kincraig 2012 camp will not be eligible, nor will those who attended the Cairngorm camp in 2012 or are in the GB Talent Squad in 2012-13.

The tour athletes will be selected by Susan Marsden (Chair), Pauline Olivant and Sue Roome.

All cases of illness or injury which may affect an athlete’s ability to compete in one of the above selection races should be notified in writing to the athlete’s Regional Squad coordinator prior to the running of that race, clearly explaining the reasons for their failure to compete. The Regional Squad coordinator will make the Selectors aware of such notifications.